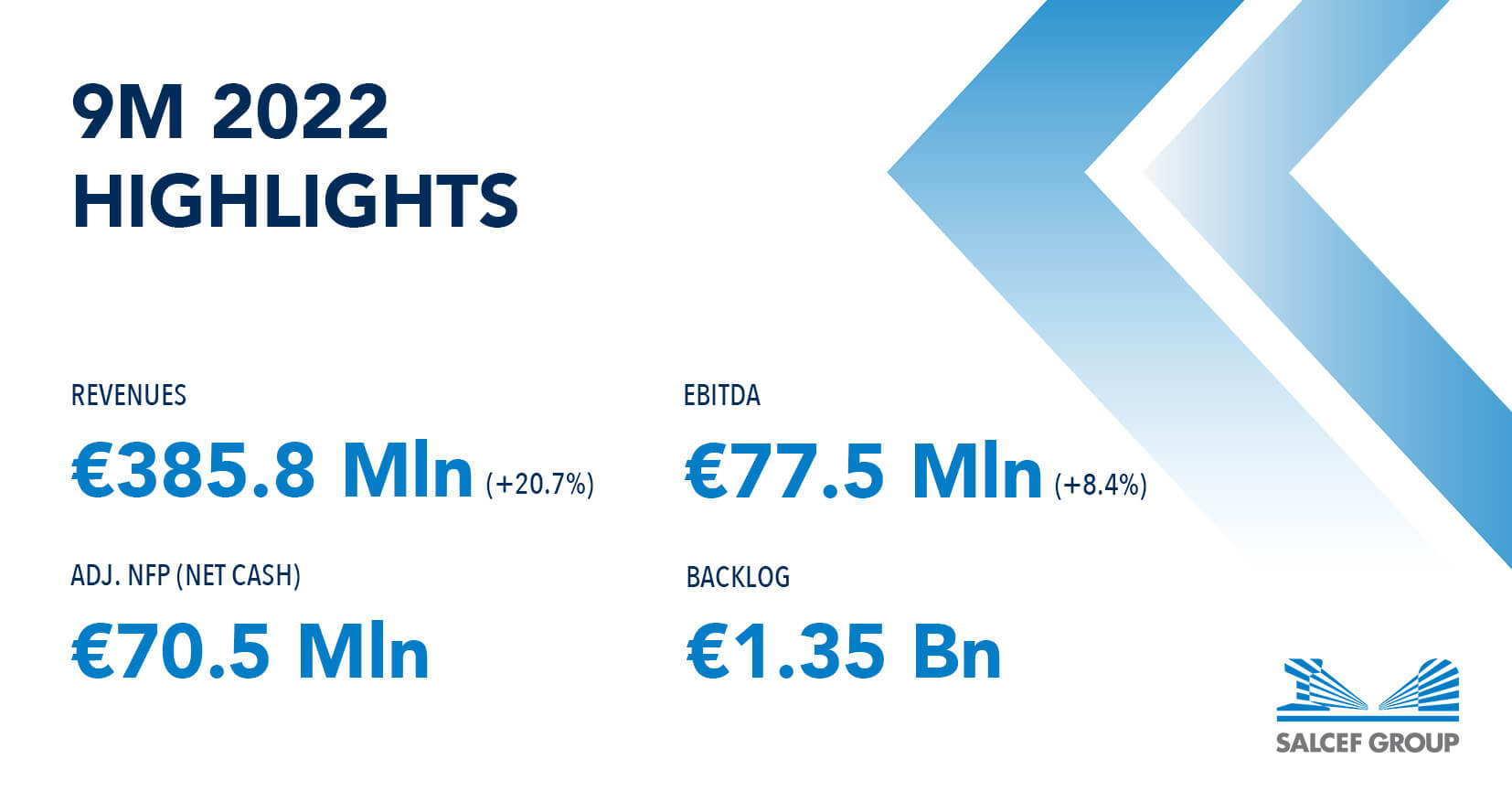 A very positive first 9 months for the Salcef Group, with 2022 revenues expected around 20% higher than 2021.

The Salcef Group S.p.A Board of Directors have approved the consolidated results for the first nine months of 2022: 9M 2022 revenues stand at €385.8 million with 14% organic growth, EBITDA at €77.5 million and an order backlog stable at €1.35 billion.

“The results achieved in the first nine months of the year confirm the Group’s solidity and resilience, now and in the future. Particularly in terms of production volumes, the growth recorded by all business units and the visibility in the remaining part of the year mean we expect 2022 revenues to increase by about 20% compared to 2021. From a cost management standpoint, the combined effect of discipline in execution and government measures supported the margins at around 20%, a level we deem remarkable, especially given the current situation. Investments by operators in Italy and in the main markets in which we operate continued to sustain our backlog, which, even with the high level of production recorded in the quarter, remained substantially flat at over €1.3 billion. Therefore, the stage is set for the Group to continue, also this year, in its robust and sustainable growth path, strengthening its role as a global player in the implementation of projects for the development of rail transport infrastructure”.

In the first nine months of the year, consolidated revenues amounted to €385.8 million, up 20.7% over the same period in 2021, mainly as a result of significant organic growth exceeding 14%, coupled with the contribution of the railway business unit acquired from the PSC Group as of May 1st, 2022 (€7.0 million) and the contribution of the Bahnbau Nord group (€13.1 million net of €3.7 million already recorded in September 2021). All Business Units showed increased revenues, led by Track and Light Civil Works and Energy, Signalling & Telecommunication which, without considering the benefits of the change in perimeter, grew 14% and 23% respectively.

Consolidated EBITDA reached €77.5 million, an 8.4% increase over 9M 2021. The EBITDA margin stood at 20.1%, confirming the profitability already shown in the first half of the year. The YoY reduction is mainly due to current high inflation and to the different revenue mix.

The Adjusted Net Financial Position as of 30th September 2022 was positive for €70.5 million (compared to €114.5 million at year-end 2021). The reduction is mainly due to the payment of around €25 million to the PSC Group for the acquisition of the railway business unit and to the payment of dividends totalling €28.5 million.

The Backlog confirmed the record-high €1.35 billion achieved in the first half of the year. In addition to the consolidation of the backlog from the railway business unit acquired from the PSC Group and to the contracts secured during the first half of the year, the main contributors in the third quarter were the two framework agreements in Romania for track renewal in the Timișoara and Cluj areas as well as contracts in Italy for ordinary and extraordinary track maintenance and power transmission lines. In terms of geographic distribution, the domestic component remains the largest one (80.0%), although slightly below the 1H 2022 figure due to the new contract in Romania. Track & Light Civil Works and Energy Signalling & Telecommunication are still the most represented Business Units, with 63.4% and 23.0% of the backlog respectively.