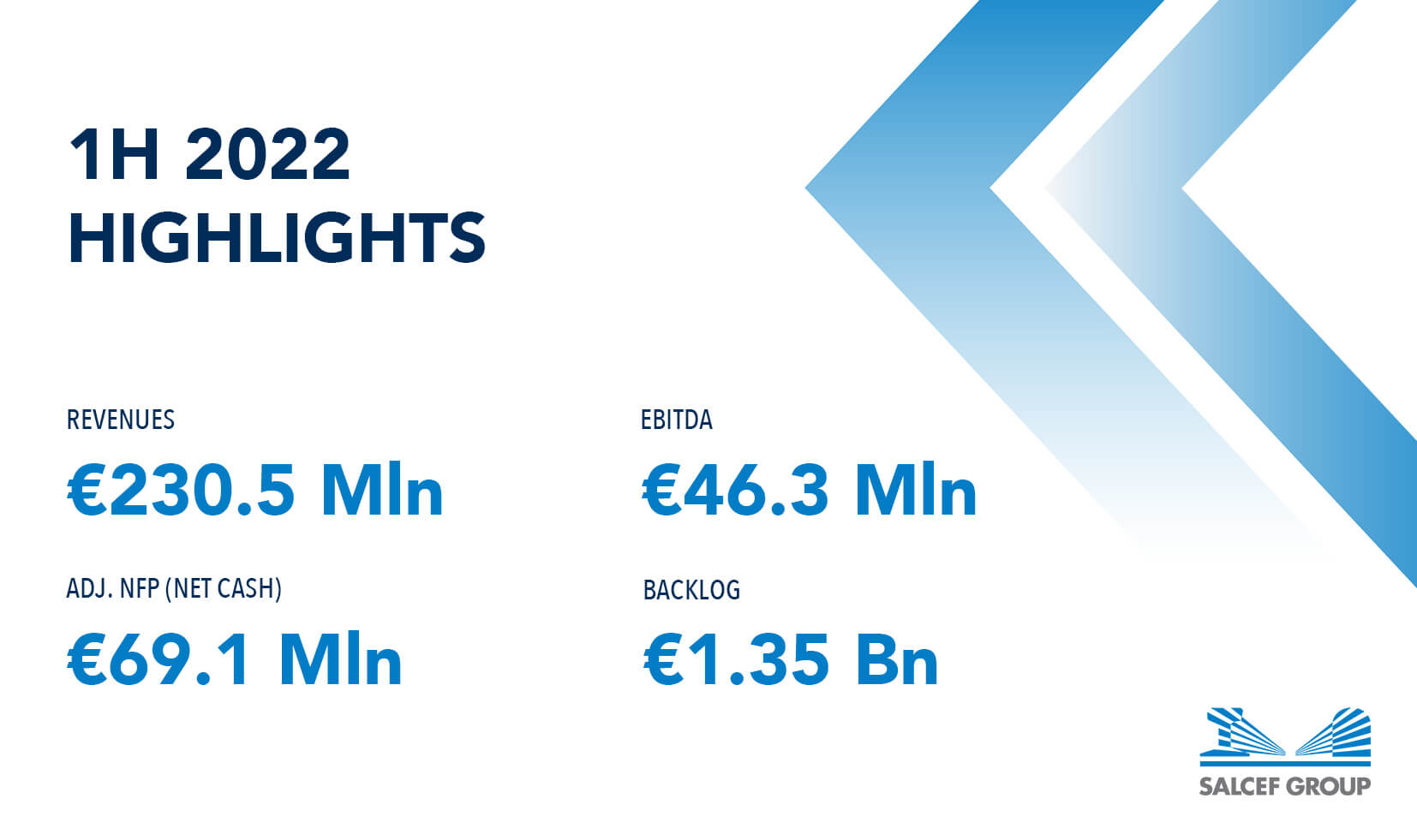 The Salcef Group S.p.A. Board of Directors approved the interim financial report as of 30th June 2022.

“The results of the first six months of the year confirm the resilience of the Group, which in a still definitely complicated global scenario, continues its growth and maintains its profitability at above 20%. We are also particularly pleased with the commercial performance, which allowed the order book to exceed 1.3 billion euros for the first time in our history. The size of the backlog and the quality of its contracts allow us to confidently look into the next steps of the Group’s growth path, which will continue to be focused on investments, external growth and operational excellence”. 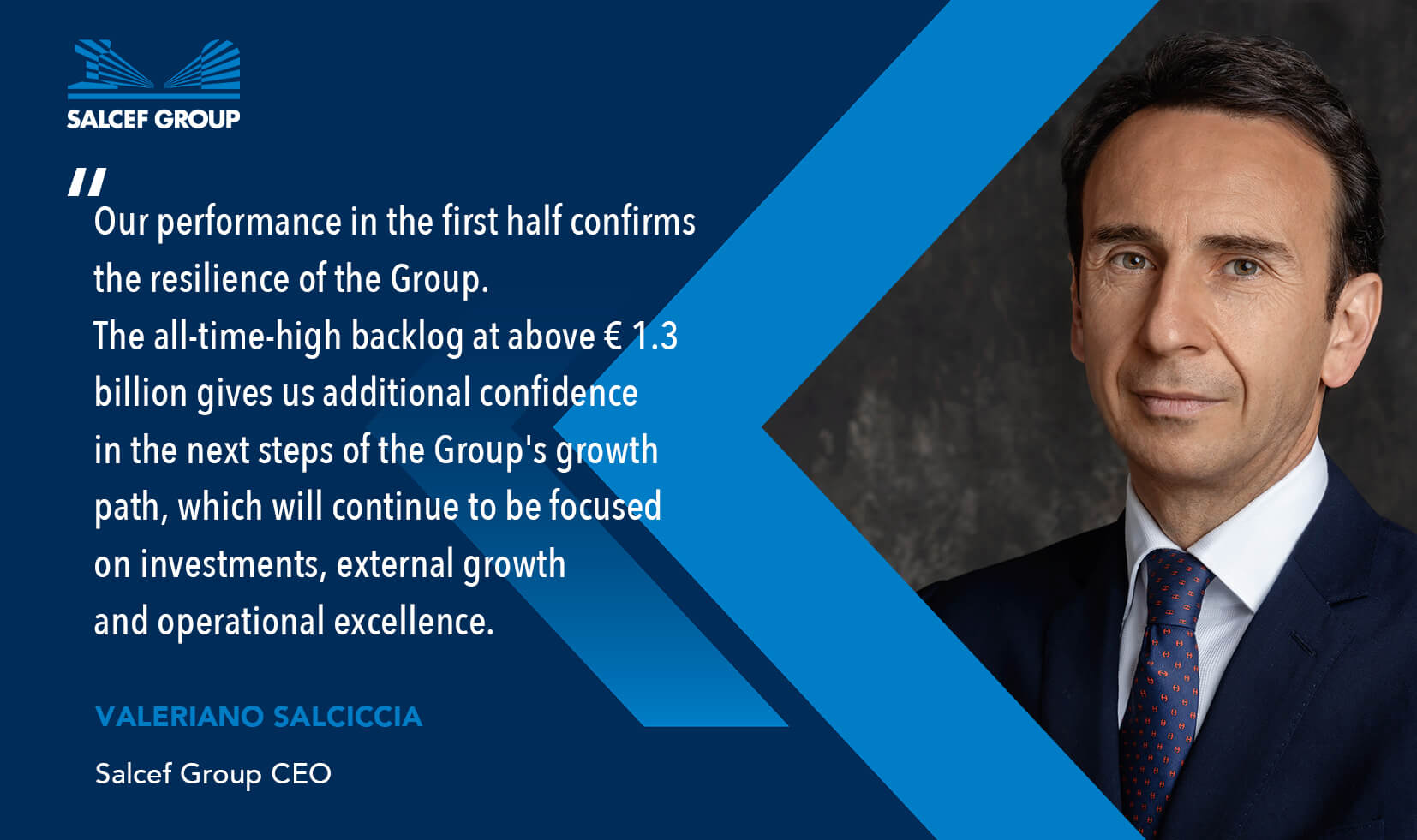 In the first six months of the year the Group recorded consolidated revenues of €230.5 million, up 8.0% on the same period in 2021 mainly as a result of a 3% organic growth, combined with the contribution of the railway business unit acquired from the PSC Group – effective as of May 1st 2022 – of €2.5 million and the contribution of the Bahnbau Nord group (€8.5 million net of €1.6 million already recorded in the first half of 2021). Growth continued in the Track and Light Civil Works and Energy, Signalling & Telecommunication Business Units, which excluding scope change benefits, recorded increases of 7% and 9% respectively.

Consolidated EBITDA reached €46.3 million, down 3.7% over the first half of 2021. However, the EBITDA margin stood at 20.1%, confirming the profitability already shown in the first quarter of the year. The YoY reduction is mainly due to the current high inflation scenario and to the different revenue mix.

Consolidated EBIT stood at €29.5 million (-14.4%) and was mainly impacted by higher D&A for €3.2 million, in line with the Group’s investment plans.

The Adjusted Net Financial Position as of 30th June 2022 was positive for €69.1 million, compared to €114.5 million at the end of 2021. The drop is mainly due to the payment of approximately €25 million to the PSC Group for the acquisition of the railway business unit and to the dividend payment for €28.5 million.

For the first time ever the backlog stood at over €1.3 billion, up from €1.2 billion at the end of the first quarter. As well as the consolidation of the backlog attributable to the railway business unit acquired from the PSC Group and to the contracts secured during the first quarter, this remarkable growth was mainly driven by the contract for the third (‘Centre’) lot of the tender to design and implement the ERTMS (European Rail Transport Management System) in Italy as well as by the contract to build the Maryland Purple Line Light Railway. In terms of geographical breakdown, the domestic component is still the largest (at 84.3%), although slightly below that of the first quarter of 2022 due to new acquisitions in the USA. Track & Light Civil Works and Energy Signalling & Telecommunications are confirmed as the most represented Business Units, with 62.3% and 23.0% of the backlog respectively.

2022
Salcef Group: in the first half of 2022 the growth continues and the backlog exceeds € 1.3 billion for the first time everPrevious Post
Interim Financial Report as at 30 June 2022Next Post